From Ramelia Williams, “The Evangelical Covenant Church’s Response to the Civil Rights Movement, 1963–1968”: 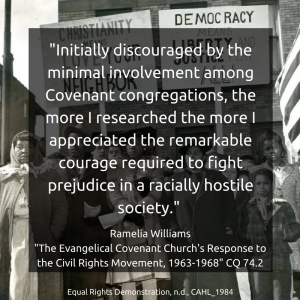 In the shadow of World War II, the Covenant Church took an official stance against racial discrimination. The Annual Meeting of 1944 adopted a resolution that reads in part: “We believe that all men are of one blood, and that all discrimination, based upon race, creed or nationality, is not in keeping with the Christian profession and life, and further, that it fosters conflict and war” (YB 1944, p. 133)….Between 1946 and 1968, nearly every Annual Meeting issued a resolution affirming the equal dignity of all people and rejecting racial discrimination, with only six exceptions.

Annual Meeting resolutions did not emerge ex nihilo, but were brought by a commission that sought to resource local congregations and guide them in action. In 1944 the Covenant Church established the Committee on Civic Relations to mold a Christian mindset toward various matters of civility. The name was changed in 1948 to Christian Citizenship Commission (and in 1968 to the Commission on Christian Action). The Christian Citizenship Commission would study and offer its opinion on suffrage, civil rights, international wars, political affairs, social ethics, and other important civic issues.

The practical action of the commission primarily took place through congregational commissions established at their request and under their direction. At its inception, the commission recommended the establishment of a “committee on civic relations” in every Covenant church, sending letters to each congregation with this request in November 1947. As the 1948 report stated, “Commission members quickly realized that no program of information or action could be implemented unless there were local committees” (YB 1948, p. 92), reporting that sixty churches had formed such a committee. The basic task of these local committees was twofold: (1) to educate their congregation about moral issues facing nation and community, and (2) to guide them in an appropriate response….The 1961 Annual Meeting approved the commission’s proposal that race be adopted as the “issue of the year,” launching a year of “denomination-wide study of Christianity and racial relations.” (YB 1962, p. 163)

As recognized by the Covenant Commission on Christian Citizenship, resolutions would be effective only as “interpreted and carried out by the local committees” (YB 1962, p. 163). For this reason I surveyed two congregations located in cities that, historically, have served a prominent role in the denomination: Community Covenant Church in Minneapolis, Minnesota, and North Park Covenant Church in Chicago, Illinois.

Read the full article here, including accounts of particular Covenant congregations and publications.

For consideration and discussion:

More Posts
In conjunction with the Covenant Quarterly, Forum offers a space for dialogue around relevant pastoral and theological issues.